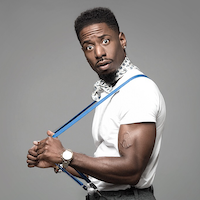 Willie Lynch Jr.
Comedian, Historian, Health Coach, and Motivational speaker, Willie Lynch, Jr. is a nationally and internationally known stand up comedian who's been seen on ""Gotham Comedy Live" on AXS TV with Ari Shaffir and Bounce TV's "Off the Chain" with Rodney Perry. He won first place in the historic Bay Area Comedy Competition 2012, Wrote for Katt Williams, played the legendary Apollo Theatre, and has toured the nation with the likes of Bill Bellamy, D.L. Hughley, Hannibal Burress, and others. Check him out a comedy club or college near you and see just why Kevin Hart called him, "Langston Hughes with a punchline." If you love intellectual humor, this is the guy for you.