The Garage At Helium: Eric Neumann 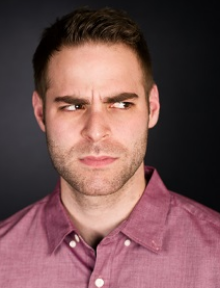 The Garage At Helium: Eric Neumann

Here is a list of things that Eric Neumann calls "accomplishments," but his Jewish mom calls "distractions from finding a wife." He was recently listed as "One of the hottest rising stand-up comedians in New York" by the Hollywood Radio and Television Society. He was featured on season 3 of Comedy Central's "This Week At The Comedy Cellar." Eric has been heard on "The Bennington Show"on SiriusXM, as well as "Barstool Breakfast" on Barstool Sports Radio. In 2016 and 2017, he was a semi-finalist in New York's Funniest Stand-Up competition for the New York Comedy Festival. He has featured for comedy legends Gilbert Gottfried and Richard Lewis. His debut headlining show, “Bring Your Parents To Work Day,” was part of the 2017 New York Comedy Festival (Sponsored by TBS). In 2018, he dropped his debut album, "Nervous Lover," which landed number 1 on iTunes’ Comedy Charts, number 2 on the Billboard Charts, and was named "Album Of The Week" on SiriusXM's "Raw-dog Channel." In 2019, he became the host and writer of "Deep Dive" on the IFC Channel. In 2020, he appeared in "The Iliza Shlesinger Sketch Show" on Netflix. When Eric is not touring, he resides in New York City where he is a regular at the Comedy Cellar, New York Comedy Club, Comic Strip Live, Caroline's, and other top NYC clubs.

Customers are expected to take necessary precautions to protect themselves and others. Per the recent St. Louis County Face Covering Order, we require all customers to enter the facility wearing a face covering or mask. When customers are seated, they are permitted to remove such covering while eating or drinking.

Here is a list of things that Eric calls "accomplishments", but his Jewish mom calls "distractions from finding a wife" He’s a New York-based comedian and a regular performer at New York’s top comedy clubs, and alternative rooms. Eric has performed at various festivals including The New York Comedy Festival, Laughing Skull Festival and Laughing Devil Festival. Eric is a regular headliner at Caroline's On Broadway and was named "One of the hottest rising star stand-up comedians in New York" by Hollywood Radio and Television Society. Eric’s audio clips have been featured on Rooftop Comedy's "Best Of" collection and have aired on Sirius XM Radio, Spotify, and Audible. In 2016, Eric contributed material to The Comedy Central Roast Of Rob Lowe. In 2016 & 2017, he was a semi-finalist in New York's Funniest stand up. In 2017, he opened for legends, Gilbert Gottfried and Richard Lewis. His debut show “Bring Your Parents To Work Day” was part of the 2017 New York Comedy Festival (Sponsored by TBS) He continues to tour the country, but still with all of this stage time, Eric is a yet to have a year that financially tops his Bar Mitzvah year.